Start typing and press
Enter to search
Skip to content 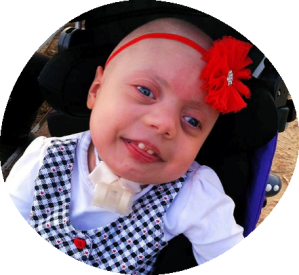 Kylee’s diagnosis was undetermined until late last year(2013) when her test results came back positive for Bohring Opitz Syndrome.

Kylee was born with breathing and feeding difficulties. She was misdiagnosed at birth with Arthrogryposis, but late last year we were told she does not have that.
By creating this page we were introduced to several conditions she could have but Bohring Opitz Syndrome stood out. We chose to have her genetically tested for it regardless of them trying to talk us out of it, because the test was about $1000 and that was a lot of money to spend on something that may not be accurate. Thanks to a few followers from this page who donated the money for the test, we were able to have the test done. It took a couple of months but we finally got the call that genetically confirms the diagnosis. I let a geneticist from California know that she had been genetically confirmed to have Bohring Opitz Syndrome and he informed me that I should have her tested for Wilm’s Tumor every 3-4 months. She had an ultrasound in August and found that she had bilateral Wilm’s Tumor on 75% of his kidneys. She has already had 2 rounds of chemo treatments and has had her left kidney removed because the tumors would not shrink anymore. Today she will start 6 more weeks of chemo. She is doing fantastic and is still a beautiful and happy child. She still continues to get frequent infections and sicknesses but God gives her the strength to endure what she can’t handle alone. Bohring-Opitz syndrome is characterized by severe intellectual disability, distinctive facial features and multiple congenital malformations. Researchers from the Department of Human Genetics in Nijmegen and an international team of clinicians sequenced the exomes of three individuals with Bohring-Opitz syndrome and in each identified heterozygous de novo nonsense mutations in ASXL1, which is required for maintenance of both activation and silencing of Hox genes. In total, 7 out of 13 subjects with a Bohring-Opitz phenotype had de novo ASXL1 mutations, suggesting that the syndrome is genetically heterogeneous. Why did we pick the name Kylee’s Place?
We chose “Kylee’s Place” because our awesome church Heights which has supported us from the beginning renamed the nursery “Kylee’s Place” in honor of our sweet Kylee. We love use some Heights ♥