Talynn Gurganus came into the world at 35 weeks. She had to spend 3 1/2 weeks in the NICU at CHKD due to respiratory and feeding issues. During this time, we found out Talynn had Partial Agenesis of the Corpus Callosum. She had other genetic tests done because all doctors suspected something was wrong. She had a simian crease on both hands, three port wine stains (heart shaped- forehead, round-back of neck, and round-above her bottom), tons of hair (all over her body), flat nasal bridge, bigger eyes, lip and tongue tie, mild hip dysplasia in her left hip, and inward turn wrists. The microarray testing (chromosome test) came back negative. The geneticist seemed shocked but at that point they wanted to watch her development and we would follow up 6 months later. 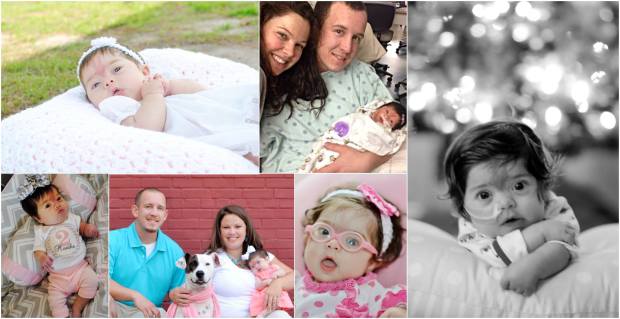 After being discharged, Talynn still failed to gain weight. We went to doctor after doctor trying to figure out what was wrong with our child. Many times I was told that “it’s just her”, “the noise is normal”, etc. I didn’t take that as an answer. Finally, I decided we needed to see an ENT because she was congested ALL the time. The ENT in Elizabeth City was honest with us and said it wasn’t normal and she doesn’t have the right machines for a baby this small and she was going to refer us to a Pulmonologist at CHKD. That is where we met the most AMAZING doctor! He never gave up on helping us. When all of the other specialists couldn’t “fit us in” he would make it happen. I honestly do not know if we would be here today if it wasn’t for the pushing that we did together to get Talynn the right care. After going through 3 pediatricians (one because he couldn’t see her when she was vomiting, one because all the congestion was normal, and one because she wrote the WRONG prescription) her Pulmonologist suggested a wonderful Pediatrician! The Pulmonologist and Pediatrician thought it would be beneficial to increase her caloric intake (27 calories), have a video swallow study done, and refer her to a pediatric ENT and GI.

During the video swallow, we found out that Talynn was aspirating when she was drinking thin liquids by mouth.  We had to start thickening her formula with rice. This seemed to help her a little bit but the vomit continued.  The next suggestion was to have another study done to see what her stomach was doing with the food she was intaking.  We found out that Talynn also had mild digestive emptying.  The GI doctor then thought that this was the reason she was refluxing/vomiting so much.  We were put on reflux medicine as well as erythromycin (which we later developed an allergy to).

By now it’s June and Talynn has gained NO weight. She is 5 months old weighing 8lbs and is severely delayed.  She cannot roll over, sit up, hold her head, etc. It was like our baby was a newborn at 5 months old because she did not do anything besides sleep and eat (which was a STRUGGLE). Talynn was always happy and would NEVER cry.  I had to keep her on a eating schedule because she would NEVER cry if she was hungry and I would always have to check her diaper because she would not cry with that either.   Since Talynn never seemed hungry and was delayed I started doing research and found that NG tubes helped babies get more nutrition.  After BEGGING the GI he finally agreed and gave Talynn a NG tube.   Due to being severely delayed, we also started therapy. We travelled to Virginia twice a week for physical and occupational therapy. CDSA did not have a PT or OT in our area so services at home were impossible. After the NG tube and therapies, Talynn rolled over for the first time at 6 months old!!

The next 4 months were the HARDEST! The ENT thought they saw a laryngeal cleft and put Talynn to sleep to do an injection laryngoplasty.  This was supposed to fix her aspiration but after a follow up video swallow we found that it did not fix anything.  We were now in August and the sickness was in the air.  Talynn was admitted every month (sometimes twice) for pneumonia and rhino viruses (all respiratory).  During theses hospitalizations we would stay anywhere from 4-5 days and Talynn would have to have IV fluids & steroids. Finally, her Pulmonologist decided that Talynn would benefit with oxygen, nebulizer, and suction machines at home when she was sick and/or sleeping.  During these times, we were also trying to get a brain MRI but due to all of the sickness it continued to get postponed.  November came and we were finally able to get the MRI.  The MRI showed that Talynn was missing the front and back part of her Corpus Collosum.  Since the brain is still unknown, it was hard for the Neurologist to say what this could mean for Talynn’s future. We continued to pray for the best and answers that would explain why Talynn had to go through all of this.

After coming home from having the MRI, we got a call from our genetic counselor.  He told us that the geneticists had a lead and possibly knew what was going on with Talynn.  He told me that the syndrome was called Bohring- Opitz Syndrome and it was EXTREMELY rare.  I started doing research.  I came across http://www.bohring-opitz.org and started reading the symptoms and other stories.  I knew immediately after reading the symptoms and Eva’s story that Talynn fit perfectly for this syndrome.  The geneticists then thought it would be necessary to send off Talynn’s blood work for the XomeDx Sequencing.  This test was NOT cheap and the insurance kept denying it.  We could have continued to battle the insurance company to pay but with these kinds of test the results take anywhere from 3+ months to get back and the insurance could continue to deny.  Finally, we decided it was best to pay out of pocket and figure out what was going on with our daughter.

Since the geneticists felt so confident that BOS was Talynn’s syndrome.  She suggested we see other specialists that BOS babies would see.  First was the eye doctors, most babies with BOS are nearsighted.  We were able to get Talynn’s eyes tested and found that she was too! Then sleep apnea was another concern so after testing Talynn she also had sleep apnea.  Wilms tumors are also a concern and these babies have to have their kidneys ultrasound every 3 months to make sure these do not develop.  I continued to research and contact mother’s most of them told me that their child had a Gtube and Nissen Fundoplication.  We had to switch our GI and ENT doctors due to not really understanding or wanting to learn about the syndrome.  After doing this switch, the new GI was willing to do a Gtube and Nissen Fundoplication. We also saw our new ENT and he was concerned because no one was ever able to check Talynn’s ears due to them being too small and he also did not see a laryngeal cleft that was supposedly fixed back in August. Both the ENT and Pediatric Surgeon thought it would be beneficial to do the Gtube, Nissen Fundoplication, Scope, and check her ears all at the same time under anesthesia.  Talynn had this done the end of December.   During the procedure, the ENT found NO laryngeal cleft and NO injection laryngoplasty!  He did find that Talynn’s ears were extremely loaded with fluid and he had to do incisions in both ears and he was only able to put a tube in her right ear due to the left being collapsed.  The Pediatric Surgeon thought that the Gtube and Nissen Fundoplication went beautifully and that she would be completely back to normal within 6 weeks. So far, she has done wonderful!

We are now 11 months old and weigh 12lbs 5 oz.  We have a lot of follow up appointments coming up and we are currently waiting for the XomeDx sequencing test to come back to confirm BOS (mutation in the gene ASXL1). We are hoping this will come back by February 2015. Regardless of the test, Talynn’s geneticist has clinically diagnosed Talynn with Bohring-Opitz. She said that Talynn fits this syndrome and even if the test comes back negative that it doesn’t mean there are not other gene mutations that are linked to BOS that have not been identified yet. From what we currently know, Talynn is the youngest BOS baby living in the US. Thank you all for the continued love, prayers, and support!

Thank you for taking the time to read our daughter’s story,
Chad & Taylor Gurganus

If you find something that you think needs correction or clarification, please let us know. website last reviewed: April 2019